As you may have guessed from all the Instagram spam, I went to London a couple of weeks ago being that typical tourist exploring everything. Firstly, can we just address the weather! I could never imagine walking around the streets of London in just a jumper in February!!!! We have been so lucky with the gorgeous sunshine over they past few days which is definitely a blessing when you’re walking loads outside.

Let’s start with the real reason for me being in London……. Jay McGuiness! Yes it’s that inner obsession of mine which is to tick off my bucket list every year meeting Jay (from The Wanted) and this time it’s been touch and go with meeting him. As you know I had been in hospital for the most of February (explained in a previous blog post) and I have had these tickets to see Rip It Up in theatre for months now and I refused to allow my illness stop me from seeing the show. My point being, for 10 years now Jay McGuiness has been my idol and helped me get through everything, just by listening to his music and watching the old wanted videos. (You may think I’m crazy, but this works for me!) so I had to make this show as I had front row tickets!

First things first, to all the people who think it’s easy meeting a celebrity you’re completely wrong and haven’t got the slightest idea how hard it actually is. I’m not no stalker (they probably think I am due to my crazy mother) but honestly I’m not. I just need to get a picture, say a quick hello and then leave. We arrived into London and went straight to the theatre to check where the stage door was so we knew in advance the location. Thankfully it’s literally right next to the front door of the theatre so you don’t have to sprint round the back like most places.

After waiting what felt like 5 hours (probably only 45 minutes) the dancers and stars of the show started to arrive. There wasn’t a huge amount of fans due to the fact the show is on till the start of June so there is plenty of time for all you fellow Wanted, McFly, JLS and Olympic fans to get your quick selfie with your favourite. I have to say all of the guys are honestly so loving to their fans and they all  took the time to meet and greet everyone waiting patiently outside. But I feel bad because I was only interested in meeting Jay so I was too nervous when Louis and Aston arrived. I left all the other fans to meet them so I wasn’t holding anyone up.

Then Jay appeared!!!! I couldn’t contain myself and started walking down the road towards him (yep crazy I know) and yet again Jay was the most humble and down to earth person ever. I am ever so thankful for every second he takes out of his time to speak to me and I appreciate it so much. I would like to say that he actually remembers me now…….. probably down to the fact my mom forces him to do videos with me every time we meet him because she’s crazy and full on. But getting the chance to meet him every year just keeps me feeling positive in life.

As for the show itself, I cannot express how fantastic the show is from start to finish. When we went to our seats can I just explain that I didn’t expect to be that close to the actual stage! I expected the theatre to be huge and it’s a small intimate theatre so it really doesn’t matter where your seat is in the room as you will still have the best view. But I was lucky in the sense that I had the sweat off the stars practically fly on me.

The best part of the show is how they truly portrayed the 60’s across to everyone, from costumes, music, and of course dancing. Obviously I wasn’t born in the sixties but we are all aware of the iconic music that was around then as they still inspire artists today. Also when you’re at a family party the music always comes on and you still have to get up and dance to them even though they aren’t ‘current’ music. What I enjoyed about the show is they had a few of the iconic stars from the 60’s speaking in the vt when they are changing the genre of music which really helped you feel like you were going back in time.

Now the audience was mesmerised by the fantastic level of dancing that everyone put in to the show. Especially for the guys who were previously famous for singing and being in the olympics. You can truly see how much effort they have all put into this to make it the most memorable show. What made the show for me was the fact that they still got Jay and Aston to sing as I expected it to just be the live band singing all the songs, So for me it was still like going to one of their gigs back when I was a teenager again.

I don’t want to spoil the show too much in case you decide that you need to get tickets (which I highly recommend) but the guys engage so much with the audience and they even do a few cheeky proposals to the lucky people in the crowd……. I happened to be the lucky one for Jay. Which I didn’t actually know how to respond and ended up going all red and shy and sitting there like a lemon just staring at him (maybe one day this can be repeated and I can actually act reasonably decent) they also walk around by the audience when singing and dancing engaging with everyone.

Sadly when we went to see the show Harry was out of it due to being ill. Which for me wasn’t a huge disappointment purely because the guy who ‘replaced’ him (back up dancer) was fantastic and really stepped up to the part of such a fantastic celebrity.

I am hoping to return and see it again with maybe Amber next time and not my crazy mother. As it is definitely a show to see and there was such a diverse age range in the audience which really helped with the atmosphere in the theatre. The show is currently on at the Garrick theatre in London until June in case you are planing on seeing.

I also couldn’t go there and not buy the merchandise! So I definitely recommend buying the programme for when you wait by the stage door to get the performers to sign by their names. I would love to know if anyone has gone to see the show and what your best part was.

Girl With The Long Hair x 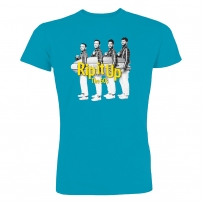 Happy Friday 🤍 I hope you all have a lovely wee

The start of lockdown I was so motivated, I’ve c

Have you watched Bridgerton? ⠀ ⠀ I was obsesse

Happy Monday everyone 🥰 I hope you’ve all had

Happy Friday everyone 🖤 I hope you all have a l

Nothing better than fresh bed sheets, a beautiful

Copyright © 2021. All Rights Reserved.
Girl With The Long Hair